“Friends, what in the name of Saint Cyprian is going on?” Ms. Choquette asks. 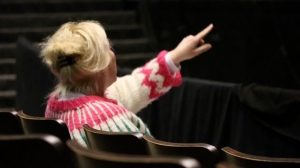 It is Saturday, Feb. 20, and the Drama Festival competition is in one week. The actors don’t know their lines, the tech crew is confused, and the show is still 12 minutes over the time limit. Choquette sits in the back of the orchestra section, her feet propped up on the seat in front of her: the posture of someone who has barely slept in weeks. She closes her eyes and sighs, stress evident in her features. Her wispy blonde hair is swept neatly onto the back of her head with a light brown clip, the stray pieces brushing the shoulders of her pink and white patterned sweater. She pours over the script in her lap, the gears in her mind turning. She makes big black x’s through multiple pages of the play, her lips pursed.

“Let’s take a break friends,” she says. “I’ll give you one hour for dinner and then we meet back here to do notes and another run through. Good work chickies.”

For Choquette, theatre has never been simply a hobby, but rather a way of life. As a child growing up in Hamilton, Mass., Choquette fell in love with the magic of theatre. She went on to study Music Education and Musical Theatre at the University of New Hampshire, and later pursued a master’s degree in Theatre Education from Emerson College. She began in Andover as a music teacher at Bancroft Elementary School, and then became the Director of Theatre Arts at Andover High School in 1996. Choquette’s college roommate, Ms. Macri, puts it best. “I’ve seen what Susan Choquette can do,” she says, “and it’s always impressive.”

It is the day before Drama Festival and I spot Choquette in the cafeteria. As she walks back towards the Collins Center after purchasing her salad, her head is held high. She looks over the sea of students like a queen looking over her palace, a gentle smile on her face. There is stress evident in her eyes, but it vanishes immediately after she spots us, a group of her students in the crowd. Her tense and serious disposition for a moment is replaced by a bright smile and a wave before she disappears through the wooden doors. I glance down at the illuminated phone in my hand, the facebook app loading. The deep blue screen vanishes as my timeline reveals post after post, the most recent being from Choquette. These particular posts are quotes from Hamilton, the musical, her current obsession.

“There is just something about Ms. Choquette that is very real and authentic,” says Anna Yeo, a student who has known Choquette since the age of 6, and has worked closely with her for three years through assistant directing and stage crew. “She is friends with many of her students on Facebook, something that many teachers would never dream of doing. She posts about her family, her musical obsessions, her reviews, her struggles. She treats her students like she treats anyone else, like real people. And she lets them know that she is just a person too. She cares about our lives.”

If a stranger to the theatre department were to walk into the Collins Center any day after school, they would without a doubt see Choquette working closely with her students and other adult colleagues.

Dana Donovan, a student who has worked with Choquette as an actor, assistant director, and stage crew member for nearly five years, says, “I’ve learned patience and perseverance from her. She is a very respectable person, and she treats her students with the same amount of respect as she does with adults.”

“It takes a rare sort of person to have such equal respect for people of all ages and all types,” says Yeo. “Some teachers will evidently undermine you by crediting your opinions and abilities to your age, but Ms. Choquette will assume you are capable of what she asks for. If you don’t know how to do it, she is more than willing to teach you.” She goes on to say, “I admire her inclusiveness. I am not a large member of the Drama Guild, but freshman year I went to her, wanting to be part of it somehow, and I was welcomed by her full enthusiasm.”

Sasha Schwartz, a theatre student at Carnegie Mellon, credits Choquette for cultivating her award­-winning passion for set design. “She never shied away from what seemed like a crazy and complicated design, which allowed me to grow as an artist and builder,” Schwartz says. “If she had never encouraged and supported me in my design ideas, all the way from Charlie Brown, when I was a freshman, to Plaza Suite, I don’t think I would’ve ended up where I am, studying theatre in college!” Following up her previous comment, Sasha says, “I admire Ms. Choquette’s spunk and determination, as well as her lack of fear for what could sometimes seem like the impossible.”

Choquette sits in one of the blue plush seats of the Collins Center, a group of students encircling her. She reads her notes about the run through off of her iPad, the screen slightly illuminating her face. Going off on a slight tangent, she mentions her first date with her husband. The students begin to pester her, pleading, “Ms. Choquette, tell us about the first date!”

“Do you r​eally ​want to hear about it?” she asks with a look of confusion and a slight smile, which is met with positive responses.

“I didn’t even know it was a date,” she admits. “I was completely clueless!”

The students give her their undivided attention as she speaks, every one of them clinging to each word, their tired eyes brimming with curiosity. It is clear that they admire her as a leader, but also respect her as a peer and mentor.

Her story is met with laughter, both from her and from the cast and crew. “And the rest is history!” she declares before redirecting the attention back toward the work at hand.

“She is charismatic and unique. Something about her is just so singular to her and only her,” says Donovan.

Three years ago the Drama Guild seniors put together a book as a gift for her, entitled Ms. Choquette’s Pearls of Wisdom. I was a freshman, and at the time I was only beginning to understand the vast amount of iconic quotes that leave the mouth of Choquette on a daily basis. The book contained everything from “Just peachy!” to “Oh, that’s just ducky!” There were also some longer and story-specific quotes, such as “I went on the stage and pulled the girl off the riser in the middle of a performance. I think she’s doing jail time now” and “Friends… Everyone is going to leave at intermission to go home and watch Grey’s Anatomy… And I may be one of them!” The book captured her most comical moments as well as her most sincere. Somewhere nestled in the pages is a quote that rings true during every production. “If we’re not having fun,” it reads, “then what’s the point?”

One of Choquette’s favorite director lines during her shows takes form in the quote “To be seen, to be heard, to be understood.” Choquette’s greatest gift by far is her ability to be seen, to be heard, to be understood, and to be respected by her students and all individuals alike. Although her job position may be the Director of Theatre Arts, her students will agree that they have learned far more from her than just acting techniques. Just recently Choquette posted a quote by Charlotte Eriksson on the Drama Guild Facebook page with the intention of inspiring the future artist in her students. I smiled when I first saw the post, reflecting on her latest pearl of wisdom. As I neared the end of the quote, the last sentence caught my eye. I felt that this sentence personified her to the fullest.

“Make your life be your art,” it read, “and you will never be forgotten.”

Editors’ note: This article was generated as an assignment for the  Journalism class. The author was asked to profile an adult member of the community without interviewing them directly.

About the Warrior Weekly

* The Warrior Weekly, the online student newspaper of Andover High School, strives to maintain a weekly schedule, publishing new news articles each Friday and other content throughout the week.

* The mission of our paper is to provide Andover High School students an open forum to discuss issues relevant to our school community. While the paper is advised by faculty, students are the essential creative force behind the content.

* The writing staff is composed of students of Newspaper Production in the English Department; members of the Andover High School Newspaper Club also submit articles.

* Comments in response to individual articles may be submitted online. Comments are reviewed before being published; we reserve the right not to publish comments for any reason. We ask that comments be school-appropriate. We will publish comments anonymously, but require proper contact information to confirm authenticity of the submission.